Laying the groundwork for a review of 35 years of the promotion of Indigenous Peoples’ human rights by establishing international and community archives and giving young people the means to continue this work of oral memory collection, thus ensuring the sustainability of the project

92ND SESSION OF THE COMMITTEE ON THE RIGHTS OF THE CHILD

The 2013 Symposium, entitled: "Indigenous Peoples at the United Nations: from the experience of the First delegates to the empowerment of the younger generation", brought together the first Indigenous Delegates that came before the UN and Indigenous youths from the Americas, Asia, Africa, the Arctic and the Pacific for a four-day conference. Laying the groundwork for a review of 35 years of promotion of Indigenous Peoples' rights through intergenerational and interactive dialogues with a formal, symbolic and public component, the Symposium gave rise to rich discussions and results.

The Symposium conferences were held from September, 10 to 13, 2013 at the Palais des Nations, in Room XVI, where the elder delegates were invited for the first time, in September 1977, at the "International NGO Conference on discrimination against indigenous populations in the Americas".

On proposal of the Aymara historian from Bolivia, Carlos Mamami, and following the UN Permanent Forum on Indigenous Issues’ recommendation 073/2009 (E/C.19/2009/14), from the 14th session of the UN Permanent Forum on Indigenous Issues held in 2009, with the common objectives of compiling and propagating the oral memory of the first indigenous delegates, empowering new generations and evaluating advances in the rights of indigenous peoples at an international level.

The objectives of the 2013 Symposium were:

This meeting produced the following results:

Visit the Symposium database, where you will find all the materials produced during the event (photos, Declaration, etc.)

Watch the documentary: "Bridge to the Future" produced by indigenous youth who participated at the Symposium

The success of the 2013 Symposium was such that it was decided to organize a second Symposium in 2015. Similar to the first, this event was designed to allow other former delegates, absent in 2013, to be able to share and transmit their experiences to the younger generation. This Symposium was designed to follow up on the work done by the young people and the commitments made between them and the elders in 2013. The Symposium, lasting four days at the UN in Geneva, brought together elders and youth from the Americas, Asia, Africa, the Arctic and the Pacific.

The objectives of the 2015 Symposium 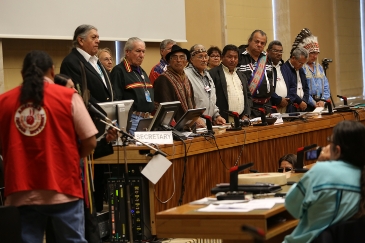 It is important to note that the two Symposiums were organised by Docip, in collaboration with organisation committees, formed for these occasions, composed of Indigenous Delegates.

The organizing committee of the 2013 Symposium was composed of:

The organizing committee of the 2015 Symposium was composed of: