Historical process at the United Nations

Indigenous Peoples have come a long way on their journey to achieving international recognition. Here you will find a summary of the significant dates marking this process, which still continues today.

Deskaheh, Letter to Sir J.E. Drummond, Secretary-General of the League of Nations, on 6 August 1923 (document also published under the name of  "The Red Man's Appeal For Justice")

The League refuses to hear him. The doors are closed to him. A few months before his death, he goes to Rochester, New York. He delivers his last speech. Stressing that the Six Nations Iroquois (Haudenosaunee) Confederacy is the oldest League of Nations, he exhorts his people to defend their Iroquois rights, just as the white man defends his own rights.

It provides access to a selection of original documents concerning historical events, primarily covering the period from 1923 (December 1922 for the first document) to 1933. This work was made possible thanks to the collaboration between the League of Nations Archives and Docip. 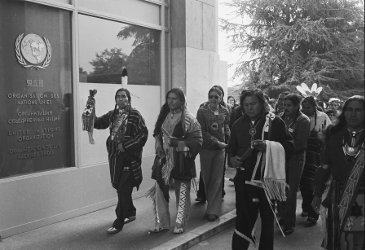 In the 1970s the international indigenous movement really begins to take shape. In 1971 the Economic and Social Council adopts resolution 1589, which allows the Subcommission on Prevention of Discrimination and Protection of Minorities to undertake a study on the discrimination faced by Indigenous Peoples. The Subcommission assigns José Martínez Cobo (Ecuador) to carry out this study and appoints him as Special Rapporteur.

At the same time, some Indigenous Peoples (notably, those of the Americas) organize themselves politically in order to assert their rights, and the UN organizes two large conferences in Geneva with indigenous delegates participating. The first, in 1977, addresses discrimination against indigenous populations of the Americas. The work is challenging and creative. The attending delegates: (1) reject the status of "minorities" and claim that of "Peoples"; (2) call for revision of International Labour Organization Convention 107; (3) advocate for the creation of a UN working group to study the specific problems of Indigenous Peoples; and (4) call for the adoption of an international declaration on their collective rights. The second conference, in 1978, is dedicated to the fight against racism and racial discrimination, which is intended to lead to States recognizing the linguistic, cultural, economic and territorial rights of Indigenous Peoples.

The "International NGO Conference on Indigenous Peoples and the Land", which takes place at the UN in Geneva, reiterates the 1977 proposal to create a UN working group on Indigenous Peoples. Due to the intensification of the indigenous movement internationally, in 1982 the Subcommission creates the Working Group on Indigenous Populations (WGIP), which is mandated to monitor the issues of recognition and protection of the rights and freedoms of Indigenous Peoples. Indigenous delegates from various walks of life participate, along with various civil society actors. In addition, the Cobo report, which is completed during this decade (published in 1986-1987), acknowledges the fundamental problems affecting Indigenous Peoples in various areas, such as health, education, housing and, again, the management of lands and territory. The final report consists of 5 volumes. To this day, it remains important for indigenous advocacy in the international arena, especially because it introduces for the first time a definition of "Indigenous Peoples", that is: "communities, peoples and nations ... which, having a historical continuity with pre-invasion and pre-colonial societies that developed on their territories, consider themselves distinct from other sectors of the societies now prevailing on those territories, or parts of them. They form at present non-dominant sectors of society and are determined to preserve, develop and transmit to future generations their ancestral territories, and their ethnic identity, as the basis of their continued existence as peoples, in accordance with their own cultural patterns, social institutions and legal system". 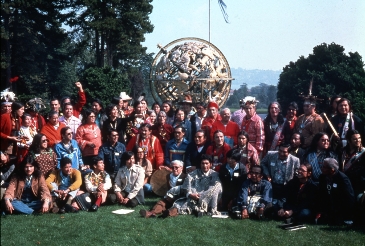 The process of pursuing recognition of Indigenous Peoples' rights continues beyond the 1970s and 1980s. For example, the proposal to create a permanent forum on indigenous issues originates at the Vienna World Conference on Human Rights in 1993, and its establishment becomes one of the central objectives of the programme of activities of the International Decade of the World's Indigenous Peoples (1995-2004). In order to discuss the possibility of a permanent forum, two workshops are held: the first in Copenhagen (Denmark) in 1995 (see report E/CN.4/Sub.2/AC.4/1995/7) and the second in Santiago de Chile in 1997.

Another significant new entity appearing at the international level during this time is the United Nations Voluntary Fund for Indigenous Peoples, which is established by General Assembly resolution 40/131 of 13 December 1985. This Fund is originally designed to provide financial assistance for indigenous delegates wishing to participate in discussions of the Working Group on Indigenous Populations of the Subcommission on the Promotion and Protection of Human Rights. In 2001, the General Assembly decides to expand its mandate (resolution 56/140) so that indigenous delegates may participate in the Permanent Forum on Indigenous Issues. Resolution 63/161 further extends the mandate to cover the Expert Mechanism on the Rights of Indigenous Peoples, and resolution 65/198 of 21 December 2010 extends it to sessions of the Human Rights Council and of human rights treaty bodies.

Subsequently, after more than 30 years of discussions and work, the draft of a Declaration on the rights of indigenous peoples becomes a reality. On 29 June 2006, the Human Rights Council adopts the United Nations Declaration on the Rights of Indigenous Peoples, and this international normative text is solidified by the General Assembly on 13 September 2007. Although the Declaration has no binding force, it contains key guiding principles for the promotion and defence of the rights of Indigenous Peoples.

Finally, the first World Conference on Indigenous Peoples, which was held on 22 September 2014 at the UN in New York, is considered to be another significant milestone on this journey. The plan for this two-day conference with Member States and Indigenous Peoples, a high-level General Assembly plenary session, was originally agreed on 16 November 2010, at the Third Committee of the United Nations General Assembly (resolution A/C.3/65/L.22/Rev.1). Indigenous delegates from 7 regions of the world carried out a considerable amount of preparation for the conference, including a meeting held in June 2013 in Alta, Norway, in order to establish a common position. Initiated by the Sámi Parliament of Norway, this conference produced the "Alta Outcome Document", which contains recommendations to the States.