92ND SESSION OF THE COMMITTEE ON THE RIGHTS OF THE CHILD

TRIBUTE TO BRIGITTE, OUR COLLEAGUE AND FRIEND 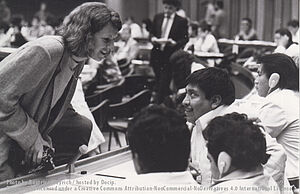 With this message, written with great sadness, Docip wishes to send a last goodbye to Brigitte Vonäsch, with whom we have collaborated and exchanged ideas so many times. Brigitte began her final voyage in the early hours of Wednesday, July 8, very peacefully, after preparing herself well for her passage to the next world.

Brigitte leaves behind her brothers and a sister, as well as many friends and colleagues who treasured her strength of character and her desire to always do her utmost to support the promotion and protection of the rights of Indigenous Peoples, since 1980.

She was responsible for Central and South America for the Swiss and International NGO, Incomindios, then became the founder of the organisation Ti Tlanitzke and, finally, was one of the originators and managers of the Swiss foundation that allowed hundreds of indigenous delegates to participate in the United Nations conferences that were held regarding their rights. Her tall silhouette will be missed in the halls of the Palais des Nations, as will be her strength and humor.

Brigitte, rest in peace. You live on in our memories.